I am an artist. I do film, animation, digital art, etc. A lot of my art involves pictures I've taken over the years—some as far back as a decade ago. In order to sustain this collection process, I'm always looking for things to capture with my camera. Many of these things I see while I'm walking, shopping, or even vacationing. Sometimes, though, I choose to use other cameras to obtain my footage, or even to scout potential future areas for scenes/inspiration.

Well, during the course of this obsession, the urge to catalog interesting/aesthetically pleasing radars struck me. But how was I going to find them? I already knew where the Bismarck, ND radar was located, but I was fairly certain there would be at least a couple of radars in each state. I just had to find a way to locate them.

Following my own advice, when one has nowhere else to start, Google is the place to go! So, off I marched to type the first phrase I could think of into the search bar: "map of doppler radar sites". Believe it or not, I not only got useful results, but I got official results in the form of a NOAA page. 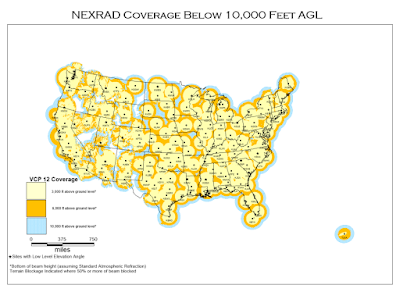 There is both a .JPG and .PDF version of the map, and the .PDF version allows for increased detail as you zoom. But what are all those letters? My guess would be some sort of callsign or designation, but once again, I turned to Google for clarification. This time, I decided to try focusing on what looked like the New York radar, KOKX, since that would be the closest to home for me. My search query this time was "kokx wsr-88d".

The first result returned was another NOAA page, this one referencing a SLEP refurbishment for the radar's pedestal (we learned about SLEP—the Service Life Extension Program—while looking into the Bismarck radar.) We also learn from this new page that the radar is located in Upton, New York. That's good to know, but we're not going to dive any deeper on that... at least not in this blog post. Instead, we continue looking through our search results.

The next page of interest we discover belongs to the Atmospheric Sciences school of Northern Vermont University, and it lists the 88D locations throughout the US as of 1983. That may seem old, but considering the existence of SLEP, it's fair to say many if not most of the radars on this list are still in service.

The most important parts of this table, though, are the latitude and longtitude provided for each radar. Armed with these numbers, we should be able to precisely find any radar we want! So, returning to KOKX, we are given a lat/lon of 405156/0725150. That means our next step is clear; we need to plot those coordinates and locate this radar. Now, if you've never worked with lat/lon coordinate formats and Google Maps/Earth, it is surprisingly unintuitive. As a result, I am going to exert some extra labor here and explain the issue, the concepts, and a way to speed things up.

First, the problem. Let's step into my definitely fictional time machine for a moment and pretend we've already solved this issue. By doing that, I can provide some contrast that will illustrate the problem.

...see the issue? NVU isn't bad; all you have to do is realize that the leading zero in the lon means it is negative, or West. After that, you just add a decimal after every second digit. That basically gives you DMS (degrees, minutes, seconds) format. Google, though... that format is ugly and dang near unusable, but that's because it is in DD (decimal degrees) format, and that's the format you have to enter in to Google Maps/Earth if you want to travel directly to those coordinates. Luckily, I have a solution in the form of a website that will help you convert between formats with ease. 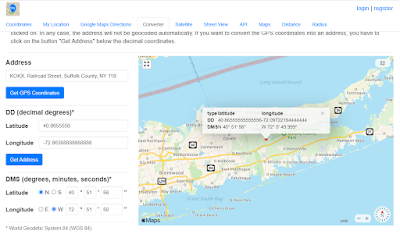 All we have to do is remember the rule I mentioned (convert leading zeroes into South or West, then add a decimal after every second digit) and enter the DMS format, and the converter will automatically give you the DD format. From there, just paste each of those values into Google Maps/Earth with a comma between them, and you'll be able to head precisely to their location.

Speaking of which, we're still in the future. Ah, the heck with it. While we're here, we might as well use the DD coordinates for KOKX we just generated and take a gander on Google Earth (since we're looking for a distinct structure, as I stated in the first part of this series.) 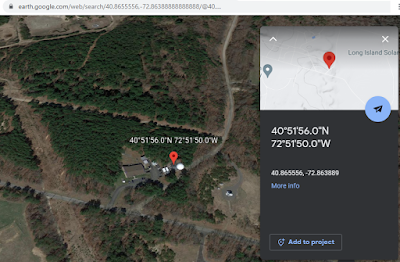 And once again, my technique proves itself accurate. Look at the round, white shape just beneath and to the right of the map marker. Doesn't that look like a big, friendly golf ball to you? I'd sure love to have confirmed this via Street View (and maybe decide if the area would be good for future film projects), but sadly there were no available locations nearby. 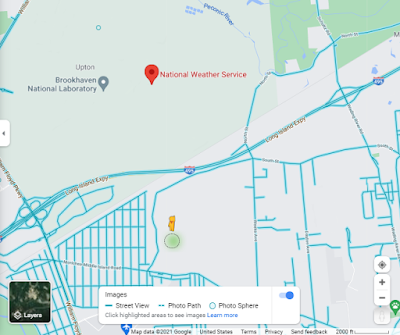 And yes, I checked cameras, too. That having been said, I did eventually get to see this radar at very, very close range online, but that's something we're going to cover in a future entry.

For now, we're headed down to Texas for the second part of this blog. "But... why?" you ask, not seeing any logical jump from any of the work we've done thus far. That's a fair inquiry, so allow to me explain.

While I was doing all of this research, I was giving a friend of mine play-by-play details. In response, my friend mentioned that they drive by a Doppler radar every day on their way to work. I already knew the city in which they lived, so they challenged me to find the radar. That's where this part of our story begins.

The city? Houston, TX. The goal? Find a Doppler radar my friend drives by every day.

To start, let's refer to our two sources we identified earlier in this blog: 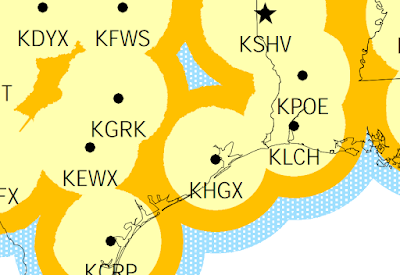 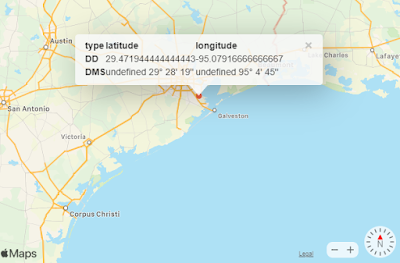 Following my own procedure, I verified the location of the radar in Google Earth, then dropped in for a closer look in Street View. 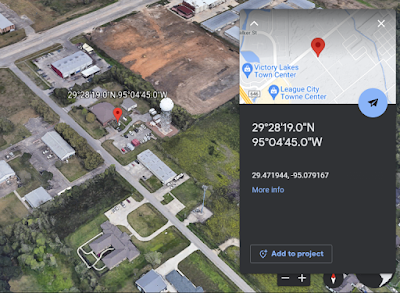 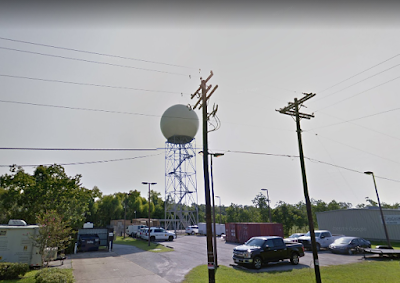 I immediately sent the Street View image to friend with a gloating tone... only to be told I was wrong, and that the radar they drive by is literally in the middle of the highway. "Which highway?" I asked instinctively. In response, they sent me a picture of the radar as a hint.

• The treeline, as it is only on one side of the road and will help orient us.

• The radar itself, which is on the opposite side of the road as the treeline.

• This roadsign, which gives us the name of two nearby roadways.

• A one way street that, with the treeline, sandwiches the radar.

Now, of course, I know there are other things on here (and there were more in the original image, as I'm sure you've noticed) that give away the location exactly. But in the spirit of challenge, I ignored those. Aside from the four things I've marked here, my only other data point provided by my friend was that the radar was on the Grand Parkway. Which, uhhh...

Basically, it surrounds Houston. To start out, we want to narrow down our range, and the names of the roads on that sign seems the perfect way to do it. 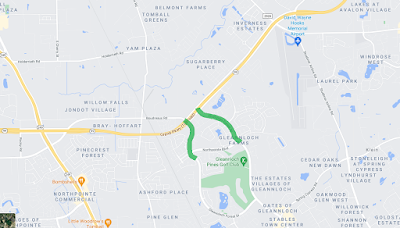 That should help us out quite a bit. Now that we have the stretch of road narrowed down, we can switch to Earth to look for any section of road that only has trees on one side. 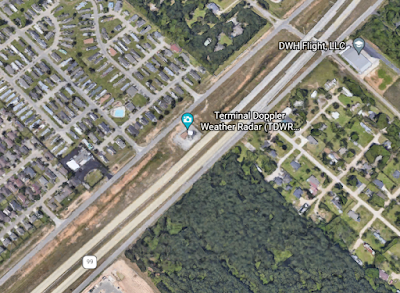 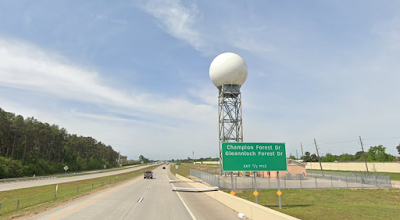 That's definitely the radar my friend sent me, so the challenge is completed. However, we are left with a burning question: why was this radar not listed on either of my sources? To begin to seek the answer to this question, I first had to research what TDWR was and what it might mean in the context of our quest.

Very quickly I found my way to a Wikipedia page, and right away I found the answer as to why this did not show up in my other two sources. To quote the article, "Terminal Doppler Weather Radar (TDWR) is a Doppler weather radar system with a three-dimensional "pencil beam" used primarily for the detection of hazardous wind shear conditions, precipitation, and winds aloft on and near major airports situated in climates with great exposure to thunderstorms in the United States."

And here's the map provided in the article. 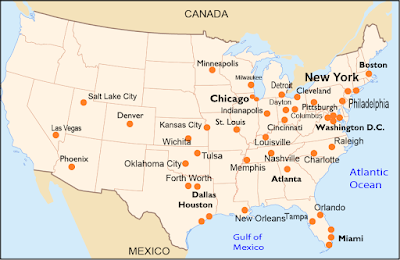 These radars are not a part of the NWS NEXRAD system, using a different technology funded by the FAA. They exist to support airport operations in areas with frequent inclement weather. Which, as it turns out, leads me to the final rabbit hole and end of our blog post.

I decided to Google some things, just because I could. I started with "tdwr houston", but tweaked my term to "tdwr" "houston" instead . I ended up in a very interesting place, to say the least.

Basically, several federal agencies have the responsibility of investigating reported radio intereferences and having them shut down, and potentially imposing sanctions on the offenders (you know how every electronic device you've ever owned has that whole "This device may not cause harmful interference" thing going on? Yeah, this is why.) Otherwise, airports may find themselves in a situation where they miss critical weather updates, and that's not an ideal situation for them to be in, generally speaking.

So, for fun, I just did a cheeky CTRL+F on this page for "houston", and I actually found two cases from 2010. They were both on the same date and for the same address, but for different businesses, and while one of them was simply a matter of unlicensed operation, the other was a bit more serious.

I'm just gonna take a stab here and say that causing interference with an airport's weather radar is not exactly going to win you any points with the FCC.

And thus concludes another part of this saga. There is plenty more to come, but in the meantime... good luck weathering the storm!

Posted by The Presumptuous Commoner at 9:00 PM
Email ThisBlogThis!Share to TwitterShare to FacebookShare to Pinterest