For those who are unaware, I grew up in Kansas. Please, dispense of your Wizard of Oz jokes now; I've heard them all before.

Anyway, we had awesome storms in Kansas. I'm talking powerful winds, torrential downpours, massive hail, majestic lightning, deafening thunder, and of course tornadoes. I wanted to be a storm chaser for a long time, and for anyone who has attended my Morning Minute streams, you'll know I used to sit around and watch the Weather Channel just for fun almost every day.

In mid-May 2021, I discovered the wonderful genre of analog horror on YouTube. I was hooked, and I immediately consumed every channel I could possibly find. I hyperfixated, and eventually, I had caught up on the entire genre in less than a month. I wanted more. 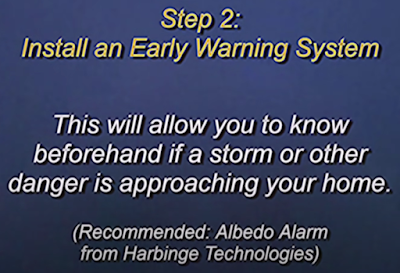 The genre of analog horror frequently relies on the use of local television stations and the associated programming, such as news or weather broadcasts. I won't delve into the psychology, but this really works for me as a vehicle for subversion into eventual horror. At any rate, I needed something to hold me over while I waited for one of the dozens of channels I had just discovered to post a new video.

Unfortunately, analog television is very close to its demise after the mandated digital transition came to a conclusion in July 2013. Beyond that, the graphics and sound of modern Weather Channel broadcasts just aren't the same. Nevertheless, I tried locating some sort of broadcast that would satisfy my need for a mostly slide-based, chill music aesthetic. I found the answer, of all places, on Twitch.

To my surprise—both at having found something and only having found a single thing—I located only one stream, running 24/7, of a local station in Bismarck, North Dakota. It was perfect. Just the right graphics, the right text-to-speech, the right music (with a modern update, of course.) I watched it all day as ambiance while working from home in my office/studio. It was so relaxing (and not uncommon amongst neurodivergent folks, I later discovered via some chats on Twitter.)

Alas, OSINT brain never turns off, and I saw a few things on some of the slides that started turning gears in my skull. This is where our saga truly begins. 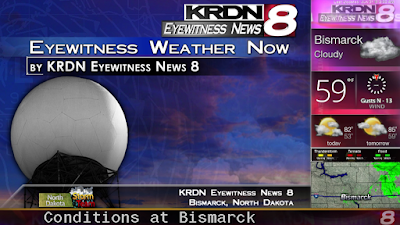 Well, to be honest, I was not familiar with radar models at the outset of this saga, so I simply Googled "bismarck weather radar" to see what I could find. The web results didn't immediately inspire me, so I changed to the image results instead. 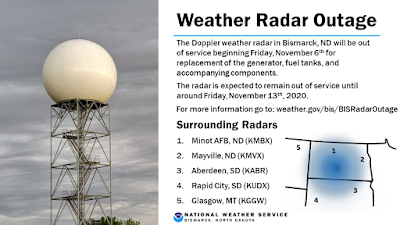 ...well, that seems like a promising start. I could do a few things here. Just for my own knowledge, for example, I could map out all of those other places in relation to Bismarck. 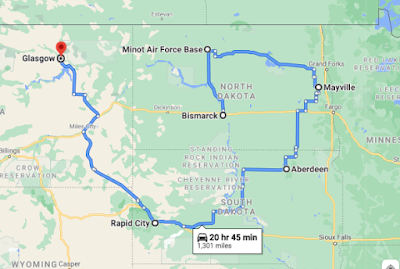 Good to know, just for future reference, but not particularly helpful in tracking down our current target. So, let's return to the page where we found that radar outage image. On this small page containing only a handful of paragraphs, we learn a number of things that are either interesting or may help us later on down the line in our research:

• The radar is a Weather Surveillance Radar 88-Doppler (WSR-88D).

• This particular notice was issued by the Bismarck, ND Weather Forecast Office.

All of this information is important. Firstly, it tells us the upgrades started only two months before our research began, so the information on this page is very likely still applicable and viable. Second, we now have a better search term in the form of the radar model. Finally, we know who, specifically, manages this particular radar. That last bit is where we're going to pivot from next. Well, after I made a little detour to read up on the WSR-88D, that is.

Heck, why not just search "Bismarck, ND Weather Forecast Office" and see what we find? As I am fond of saying when discussing OSINT, always Google things. Always. 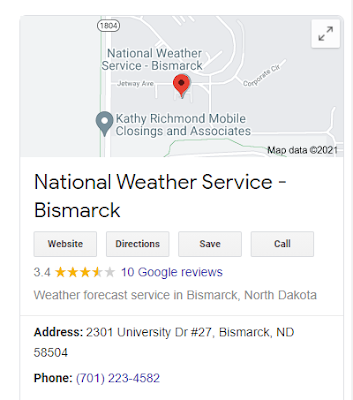 Uhhh, that was easy, right? The next step here would be to look at this location in Google Earth. We're looking for a distinct architectural structure, so scanning the area in Earth is likely going to be more fruitful than the ground-level perspective we'd get in Street View. In fact, I've used basically this exact strategy in my earliest OSINT post on this blog. 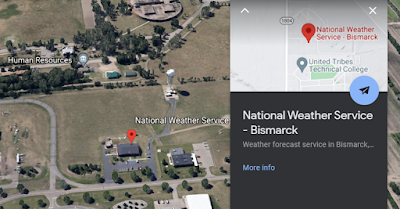 That certainly looks like our friendly neighborhood WSR-88D. How about we drop into Street View and take a closer look? 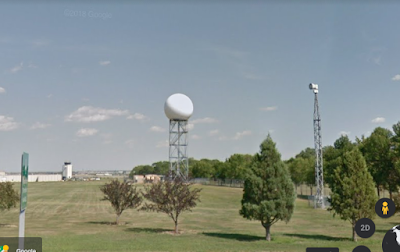 And that's where we are going to stop for now. This is only the first in a series of posts related to this saga. Additional entries will follow in the near future, and I don't have a definitive end in sight.

See you next time. In the meantime, good luck weathering the storm.

Posted by The Presumptuous Commoner at 4:40 PM
Email ThisBlogThis!Share to TwitterShare to FacebookShare to Pinterest